In 1955, groundbreaking for Linfield's 'new gym' and 'student union building' 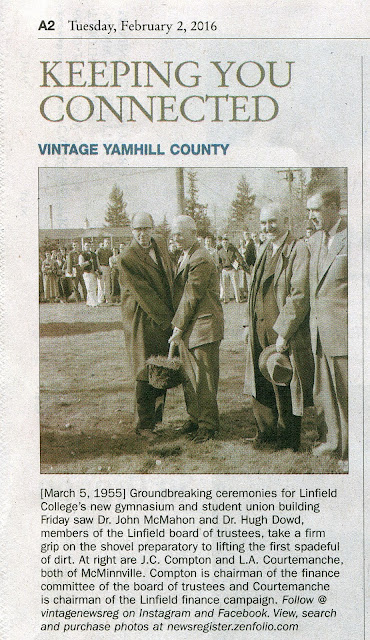 According to Linfield Sports Info...


In 1920, Riley Gym was built adjacent to historic Pioneer Hall at a cost of just over $25,000. Riley Gym served as the basketball home of the Wildcats for 67 seasons. A granddaddy of small college gyms, Riley had its last men's basketball game in February, 1989.

Riley Gym was preceded by a different gym in which its first game was held in December 1921.

Linfield's first on-campus basketball court was located on the north end of campus in the building now known as Newby Hall. The floor was miniature by today's standards and there were no boundary lines. The surrounding walls prevented players from leaving the playing area. As a game was about to start, someone would check that all the doors were closed tight, the ball would be tipped off at center court, and it was every player for himself.

Up until 1907, Newby Hall, nicknamed the "Chem Shack," was illuminated by candles with tin reflectors. In this era, many of the gyms the Wildcats played in were smaller and even more primitive than the one on the Linfield campus.

Around 1900, Linfield played its home basketball games in the old pavilion in the city park. Following practices and games, players had to heat their own shower water using a wood-burning boiler.

A reader said, "... they never did the part about "razing the old gymnasium" - it was still the original when they closed it down in '89."

Wildcatville says: Correct. But, what an "original" it was!

Below is a Linfield men’s basketball game story from 12/13/1970 Oregonian. Note:

+“…Linfield’s Riley Gym, where the partisan crowd has been known to make fumbling idiots of competent players.”

+”But then the screaming Riley Gym crowd appeared to take control.”

It was a combination of good coaching, good teams, a tiny gym and rabid fans. 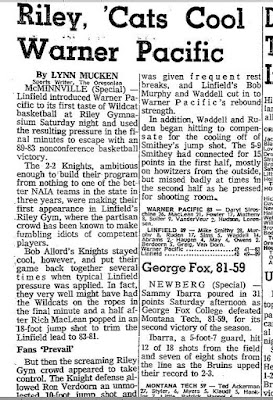 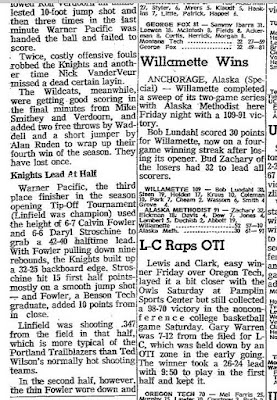 Posted by Wildcatville at 9:21 PM