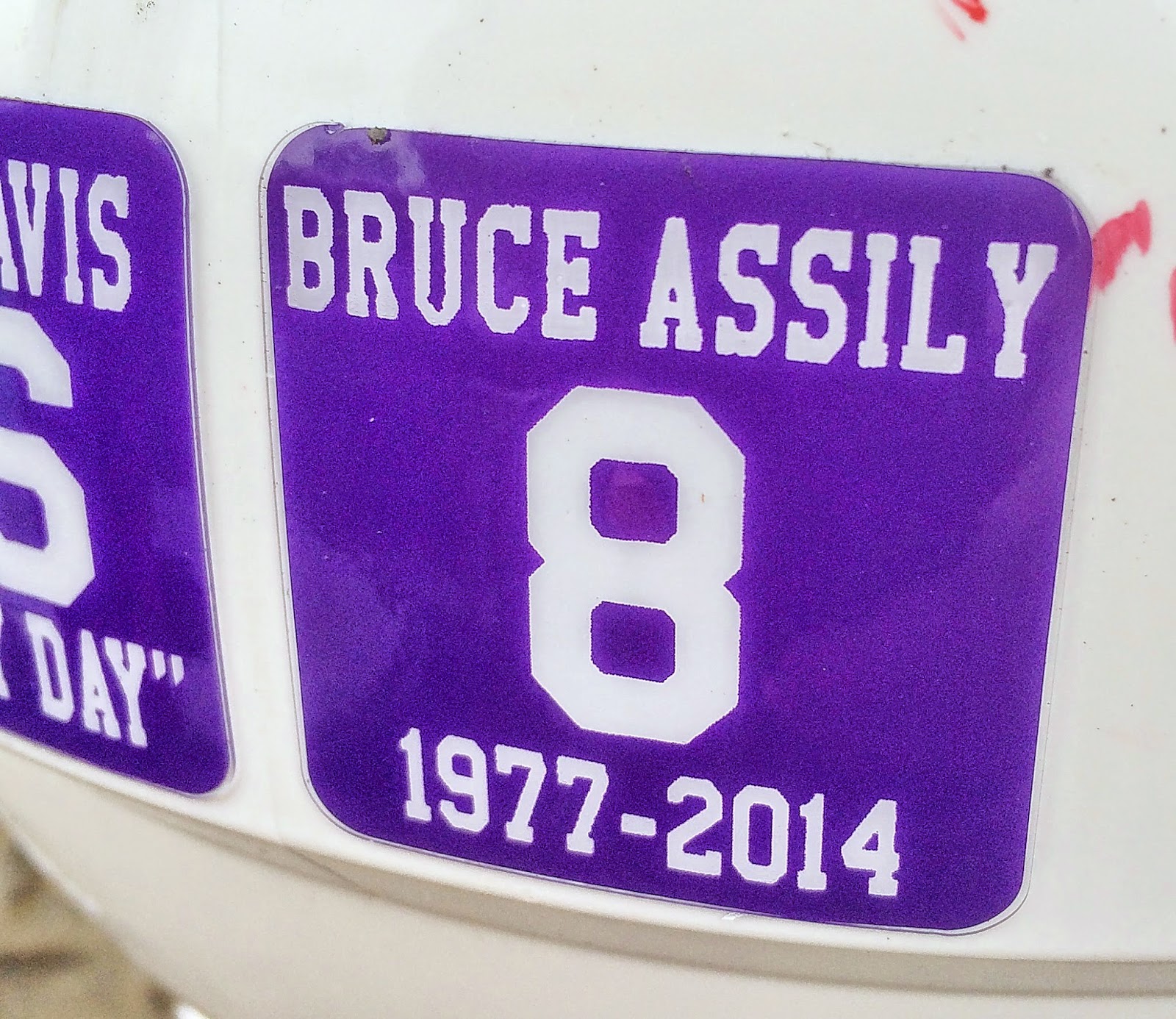 Bruce Assily, who starred as a Linfield football defensive end in the late 1990s, died after diving in the ocean off Honolulu’s Kaimana Beach in Waikiki the morning of Friday, Jan. 24, 2014.

Honored with decal on back of Linfield football 2014 helmets

"This past Friday former Linfield Stand-Out Defense End, Michael Bruce Assily (1996-1999) passed away on Friday, January 24th at the age of 36 in a diving accident off Kaimana Beach in Waikiki.  Apparently Bruce was free diving for fish with a friend at 5 a.m. in preparations of last week’s Pro-Bowl and ran into trouble. Bruce’s friend was able to get him back to the beach after Bruce was in prolonged distress.  Police and medical professionals were on the scene and transported Bruce to a hospital but they were unable to revive him."

A 1995 graduate of Honolulu’s Saint Louis High School, he played in Linfield’s first game (vs. Western Oregon) of the 1995 season and broke a fibula. He was a medical redshirt that season and played the Wildcats' 1996-1999 seasons.

Ryan Haack redshirted in 1991 and lettered 1992, 1993, 1994 and 1995 playing on the defensive line for the Wildcats. Haack's last season and Assily redshirt year was 1995. "This is such a tragedy, Bruce was the most fun loving guy I've ever met," said Haack. "I played with him only briefly" (in the opening season game against the alumni and the first counting game versus Western Oregon), but I still remember he made everyone playing have fun. He laughed while he played because it was such fun for him."

Haack noted that Ryan Carlson, creator and producer of cathomealumni.com and the "Linfield Legend: Bruce Assily (1996-1999)" video linked below played the opposite side defensive end with Assily.

==Text of Honolulu Star-Advertiser story, "Diver who drowned in Waikiki is identified"

The city Medical Examiner's Office has identified the 36-year-old man who drowned while free diving Friday as Michael Assily of Aiea.

Emergency Medical Services said Assily was diving with a friend at 5 a.m. near Kaimana Beach in Waikiki.

When firefighters arrived, police officers were applying CPR. Paramedics took over and took the victim in critical condition to a hospital, where he died.

Police have classified the apparent drowning as an unattended death.

An autopsy will be performed on Monday to determine the cause of death.

A 36-year-old man has died after an apparent drowning off of Kaimana Beach on Friday before 5 a.m., according to Honolulu police.

Officers said the man, who weighed about 250 pounds, was diving with a friend about 50 yards offshore. He then lost a fin and began struggling while treading water for about 20 minutes. His friend managed to get him to shore where six officers arrived and performed CPR on the victim. Firefighters then arrived and took over CPR.

The victim was taken to Straub Clinic & Hospital in critical condition where he later died, police said.

Police are investigating the incident as an unattended death. There are no initial signs of foul play.

==Info from McMinnville N-R 4/6/2000 story “Students share their culture April 15”
Bruce Assily was a member of Linfield’s Hawaiian Club and co-master of ceremonies of the club’s 28th annual lu’au held in 2000.

==Photo cutline from McMinnville N-R 11/18/1999
“Linfield senior defensive end Bruce Assily (8) gave an emotional speech to his teammates following the final game of the season.’I'm going to miss you guys,’ he said while holding back tears. Assily was named the Northwest Conference Defensive Player of the Year.”

==Part of text from McMinnville N-R 9/16/1999 “Pummeling of Redlands catches eyes for Linfield”
“This is my last chance to dance this year," said senior defensive end Bruce Assily, echoing the sentiments of a lot of players. "I have only eight more hours of football, 60 minutes a game. I just want to take it one game at a time."

Is football important to Linfield College?

The answer is "yes."

Chartered in 1858 as McMinnville College, Linfield started playing football in 1896.

But, as important as it is now, statements by two presidents during the college’s early years painted a bleak picture for the sport. 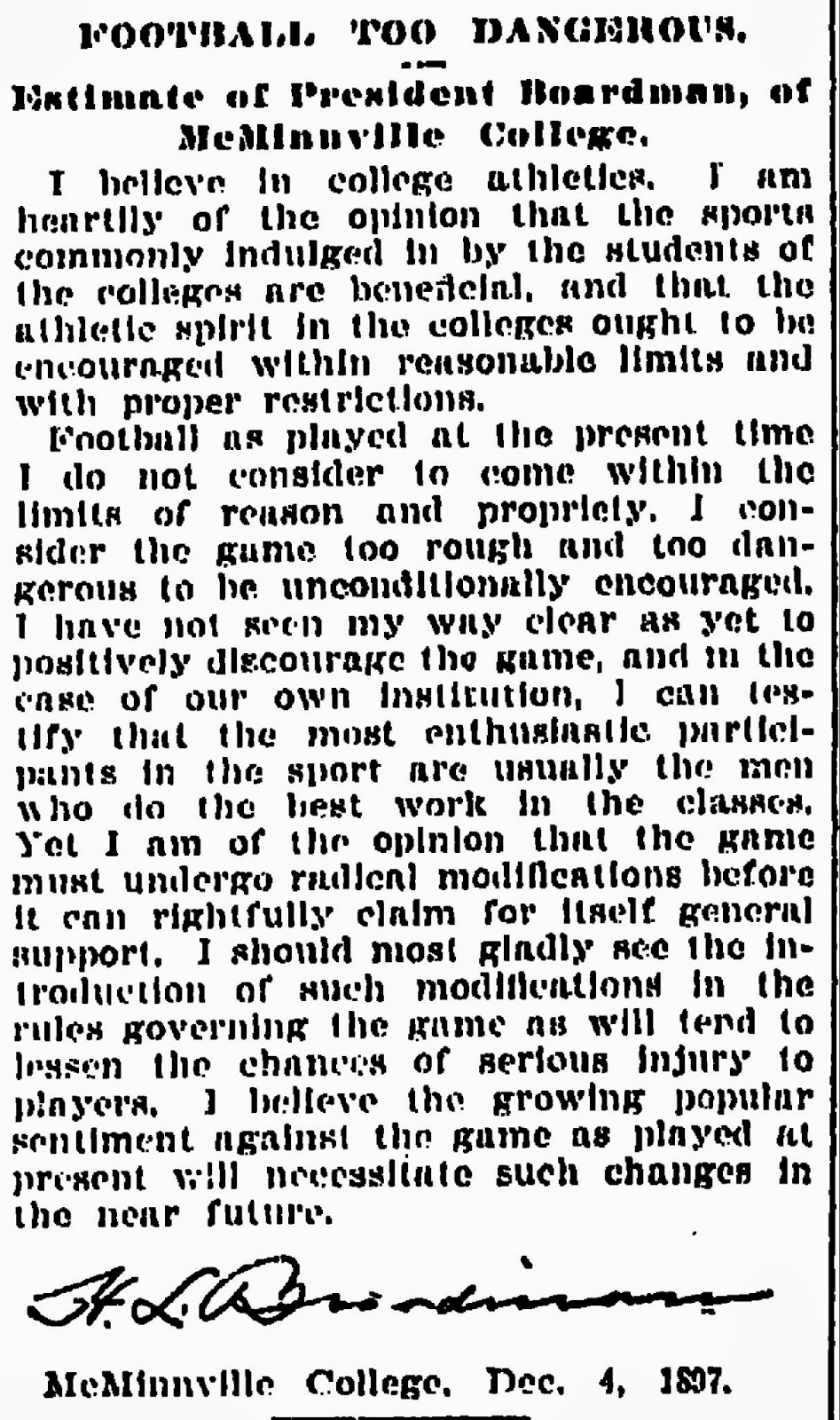 "I believe in college athletics. I am heartily of the opinion that the sports commonly indulged in by the students of the colleges are beneficial, and that the athletic sport in the colleges ought to be encouraged within reasonable limits and with proper restrictions.

"Football as played at the present time I do not consider to come within the limits of reason and propriety. I consider the game too rough and too dangerous to be unconditionally encouraged. I have not seen my way clear as yet to positively discourage the game, and in the case of our own institution, I can testify that the most enthusiastic participants in the sport are usually the men who do the best work in the classes. Yet I am of the opinion that the game must undergo radical modifications before it can rightly claim for itself general support. I should most gladly see the introductions of such modifications in the rules governing the game as will tend to lessen the chances of serious injury to players. I believe the growing popular sentiment against the game as played at present will necessitate such changes in the near future."

"GAME MUST BE ELIMINATED"

"I am bold enough to make the assertion that in order to eliminate the objectionable features of football, the entire game as played in American college must be eliminated. With the danger to life and limb, the brutality and the rowdyism taken from the American game, the remaining features of the game itself would not be sufficient to attract attention. The same amount of morbid curiosity that attracts a crowd of people to a street brawl or to a prizefight brings them together to witness the great American game, with blood and broken bones as the anticipated finale. Early in 1906 the faculty of McMinnville College, with common consent, eliminated football. The result has been apparent in better discipline in the college, better recitations, more gentlemanly deportment in and out of college, and a better moral tone throughout. The physical energies of the student body have been centered on basketball and track work to an extent that resulted in the building up of winning teams of athletes. McMinnville College believes in athletics, and would welcome a return to the Rugby or association game, but it does not believe the American game of football is a proper form out outdoor exercise. We took a long step in becoming the college in the Northwest to place the stamp of disapproval on football. But the results have been so satisfactory that that there is no likelihood of this order ever being rescinded."

--Riley took office March 1, 1906. On March 27, 1906, McMinnville College's board of trustees met and suspended football. Linfield Athletics says, "Football suspended by the Board of Trustees in the summer of 1906." The statement above from Riley says the faculty eliminated football. Perhaps both the trustees and faculty approved football's elimination?

--Riley is the namesake of Linfield's Riley Student Center which was the college's home basketball court ("Riley Gym") before Ted Wilson Gym in the HHPA (Health, Human Performance, and Athletics) opened in 1989. Information at the Linfield Athletics website says, "In 1920, Riley Gym was built adjacent to historic Pioneer Hall at a cost of just over $25,000. Riley Gym served as the basketball home of the Wildcats for 67 seasons. A granddaddy of small college gyms, Riley played host to its first game in December, 1921, and its last game in February, 1989." Oh, did you know that the ashes of Riley and his wife, Julia Pearce Riley, are buried on campus, beneath the Melrose Hall office window of the college's president.

--In a special afternoon chapel on Jan. 10, 1922, Riley announced that football would resume in the fall and that the name of McMinnville College was now Linfield College. The name change was approved by unanimous vote of the trustees that morning.

--On Nov. 24, 1922, as part of Linfield’s Homecoming the college football team lost 36-0 to Willamette in the first Linfield football game to be played in 16 years.

For consideration as 14th awesome Linfield thing that happened in 2013

The 2013 football team (11-1 season record) continued The Streak, won the Northwest Conference championship, had NWC offensive and defensive players and coach of the year, and won two games in the NCAAD3 national championship playoffs.
Posted by Wildcatville at 3:06 PM 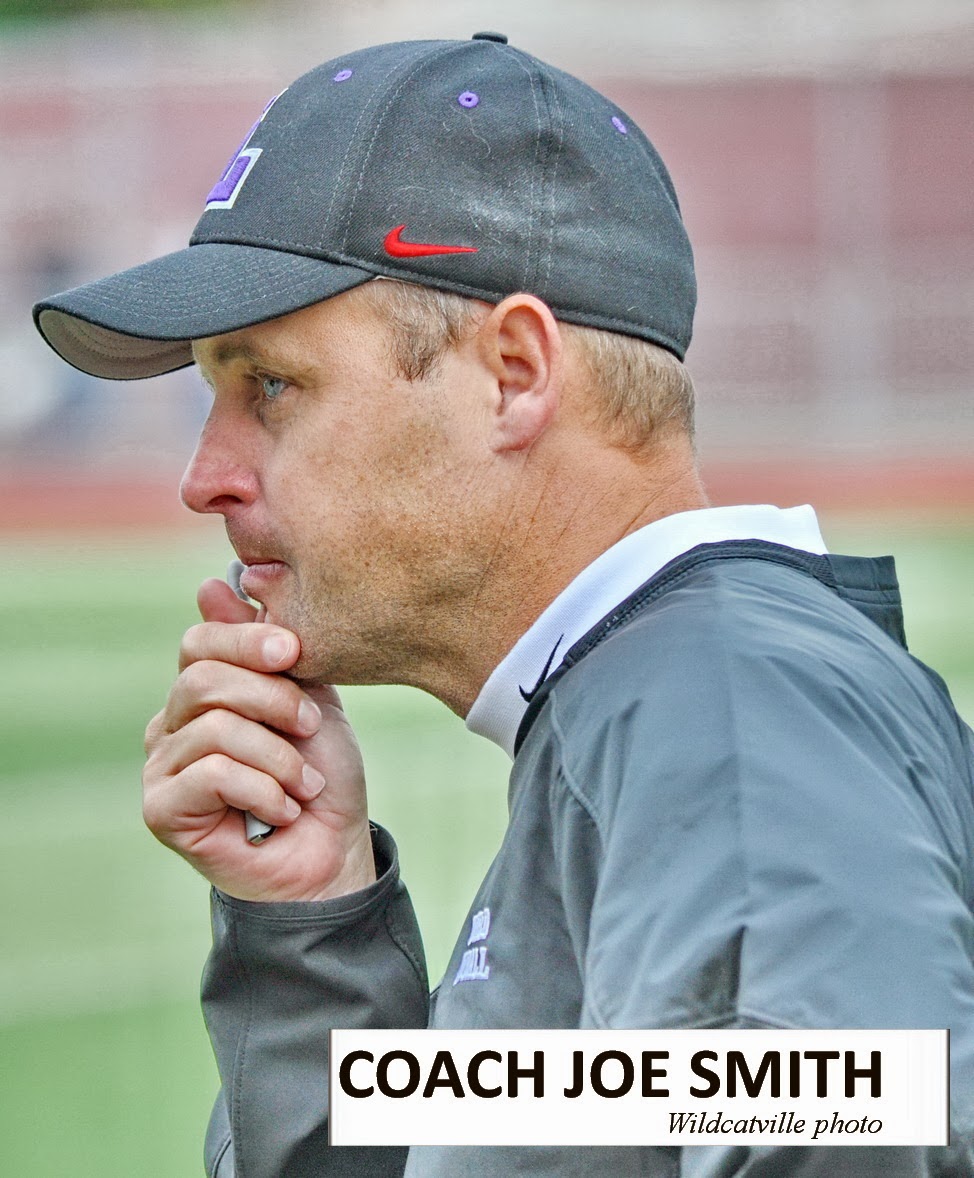 Linfield Athletics
announced next
season's football
schedule ...
... in its Wildcat
newsletter winter
2014 issue and
in a website post.

Season start for the Joe Smith-coached Wildcats is Sept. 13 at Chapman University (Ernie Chapman Stadium) in Orange, Calif. A week later, Sept. 20, the 'Cats are at Redlands University (Ted Runner Stadium) in Redlands, Calif. The southern California universities are about an hour driving time apart in San Bernardino County.

During the 2013 season, Redlands beat Chapman 21-17. In the NCAAD3 football playoffs opening round, Redlands lost 35-7 in Texas at Mary Hardin-Baylor.

Linfield has never played Chapman in football. It's played Redlands five times and won all. The last two times Linfield played Redlands were in the 2003 season both on Linfield’s Maxwell Field. Wildcats defeating Bulldogs scores that year were 49-10 (regular season) and 31-23 (NCAAD3 playoffs). The score was 59-21 in the 2002 season, the last time Linfield has played a football game at Redlands.

The California games are followed with a bye (Sept. 27) and then the Cats’ NWC/Northwest Conference opener is Oct. 4 in Puyallup, Wash., at Sparks Stadium versus PLU. 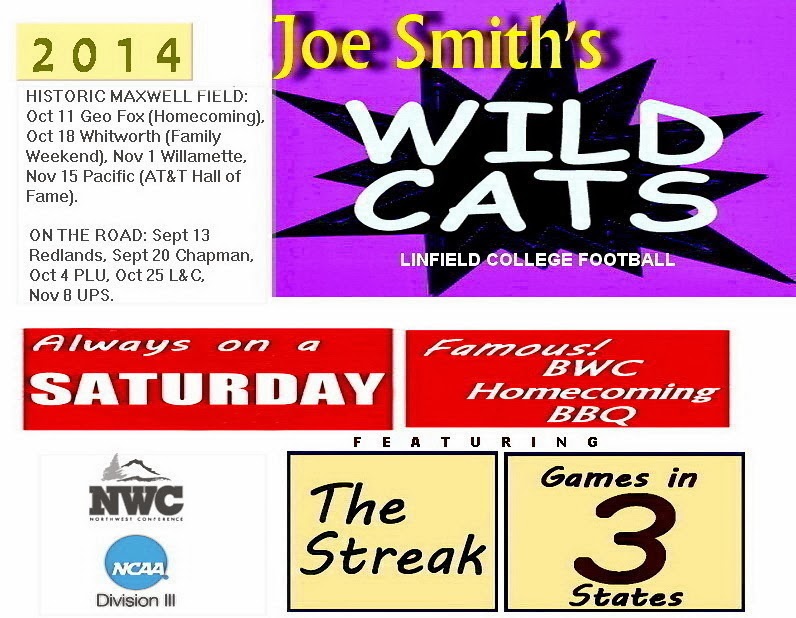 Posted by Wildcatville at 2:27 PM 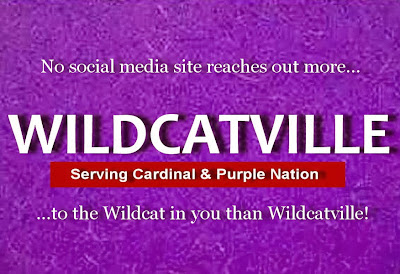 Posted by Wildcatville at 10:51 PM

Linfield winning Northwest Conference football championships is not taken for granted. But, these days NWC titles are not out of the ordinary.

That was not always the case. 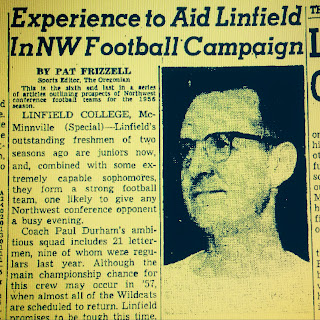 However, some sources, including a list of conference champs posted at the NWC website and the Willamette football media guide say Willamette was the titlist.

Linfield and Willamette football teams did not play each other in 1935. Willamette had a 4-0-0 conference record and Linfield was 3-0-1.

In summary, which team won the title or which teams shared the 1935 title is disputed, but not by Wildcatville.

That's the Wildcats team which started Linfield's famous "The Streak." Since the 1956 season, every Linfield football team has had a winning record, something no other college football program on any level can boast. Coached by Durham, the 1956 Wildcats won the Northwest Conference title and had 3-1-1 conference record and was 6-1-2 overall. Lewis & Clark was second with 3-2-0 in the NWC and 7-3 for the season.

--Link to PDF from an Oregonian sports page for Sat., Sept. 15, 1956, previews the 1956 Linfield football team. That season started with consecutive home games vs. Portland State, Lewis & Clark and the Seattle Ramblers.
Posted by Wildcatville at 2:15 PM