Posted here article about Linfield baseball from Sunday Oregonian - May 2, 1971. In the 1971 season, the Linfield baseball team, coached by Ad Rutschman, won the NAIA World Series in Phoenix, Ariz., on June 9, 1971. The Wildcats beat David Lipscomb, 9-8 in 10 innings. 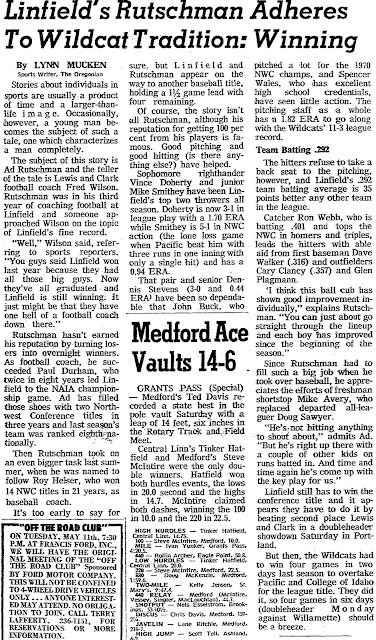 Posted by Wildcatville at 11:06 AM

See Oregonian sports column of Aug. 27, 1959, posted here. Sadly, as a member of the New York Titans of the American Football League, Howard Glenn died of football-related injury/injuries on Oct. 9, 1960, in Houston, Texas. The Titans played the Houston Oilers on that date. More info here:
http://talesfromtheamericanfootballleague.com/the-tragedy-of-howard-glenn

Posted by Wildcatville at 11:04 AM 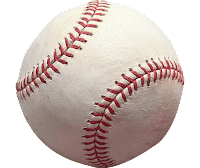 Do you know what positions Ad Rutschman played in baseball in high school,  Hillsboro/Hilhi Spartans, Linfield College Wildcats and summer semi-pro Drain Black Sox? Answer from Ad R in June 2018: Second base in high school. Center field in college. He played both (second base and center field) for Drain.
Posted by Wildcatville at 10:40 AM 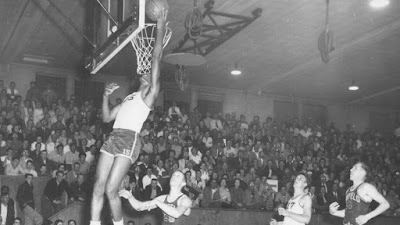 When did a Linfield men’s basketball team play a Northwest Conference opponent which had future NBA and NFL stars in its starting five? It happened not once, by three times.
It was during the 1954-1955 season when Roy Helser was Linfield men’s basketball head coach and the team’s top player was 6-foot-5 forward Don Porter. Both are in the Linfield Athletics Hall of Fame.
The NWC opponent was the College of Idaho of Caldwell, Idaho. One of its starting forward was 6-foot-5 freshman Elgin Baylor, who went on to NBA fame and is in the Basketball Hall of Fame. Starting center was 6-foot-3 R. C. Owens, who later was a star receiver with the NFL San Francisco 49ers.
In 27 games during the 1954-1955 season, Baylor averaged 32.8 points and 18.9 rebounds per game. An Oregonian sports writer/sports columnist praised Baylor’s “amazing spring and accurate timing.”
C of I had a 23-4 win loss record and was 15-0 in conference that season. It was the first men’s basketball team in NWC history to go undefeated in conference games.
On January 17, 1955, in jammed packed Riley Gym, McMinnville, Linfield lost 90-62 to C of I.
In Caldwell on Feb. 18, 1955, and Feb. 19, 1955, respectively, Linfield lost 77-43 and 86-57 to C of I.
Baylor started college in Idaho following a storied high school basketball career in Washington, D.C. After the 1954-1955 school year, he transferred. Why? C of I coach Sam Vokes was fired and the college restricted athletic scholarships.
Baylor moved to Seattle University, sat out his transfer year, and played two seasons for Seattle U. He was the #1 overall pick by the Minneapolis Lakers in the 1958 NBA Draft playing initially for Minneapolis and later, after the team moved, for the Los Angeles Lakers.
=Back to C of I 1954-1955 basketball … Amazingly, the season did not end for College of Idaho in the NAIA national basketball tournament in Kansas City. C of I was in the 1955 NAIA District 5 playoffs in Bozeman, Montana. The winner would go on to KC.
On Feb. 28, 1955, Baylor scored 44 points leading C of I to a 93-71 win over Carroll College of Helena, Montana. In the district championship game on March 1, 1955, Baylor scored 43 points, but host Montana State won, 78-76.
=And, about Baylor's time in Seattle ... His last game for Seattle U was in Louisville, Kentucky, in the 1958 NCAA men's basketball tournament championship on March 22, 1958. He scored 25 points and had 19 rebounds, but Kentucky won, 84-72. However, he was named the tourney's Most Outstanding Player.
………………………
PHOTO shows action from one of the February 1955 Linfield at College of Idaho men’s basketball games in Caldwell, Idaho. C of I’s Elgin Baylor, #15, has the basketball. Who are the two Linfield players are in the photo? We can’t identify them? Can you?
ANOTHER story at Wildcatville might interest you. Read it at URL link below:
https://wildcatville.blogspot.com/2015/08/linfielder-dennis-anderson-quoted-in.html

Posted by Wildcatville at 11:15 AM

Posted by Wildcatville at 4:57 PM