Dr. Bob Gill: This time, Portland sports backer makes history instead of just making it possible for others

Dr. Bob Gill has a Linfield connection. Scroll to end of story, click on link to learn about the connection.


It was an eventful Tuesday night (Sept 4, 2019) at Multnomah Athletic Club, with big-ticket inductees Mark Radford, Ray Blume, Kenny Moore, Molly McConnell and the original, 1975 Portland Timbers taking bows as they made their way into the Oregon Sports Hall of Fame.


Then there was a name a lot of sports fans won't recognize, but was every bit as deserving.


Bob Gill made his living as a dentist in the Portland area, but his avocation — really, his hobby — is tracking sports history.

"Bob is one of the better sports historians ever to come out of Oregon," said Ed Grossenbacher, Gill's close friend, handball partner and a member of the Oregon Sports Hall of Fame himself.


"He probably knows more than anybody about the history of football in the state," said John McCallum, president of Prime Time Sports, which runs the annual Les Schwab Tires Bowl high school all-star football game.


Gill has authored a pair of historical books — "Mel Renfro: Forever a Cowboy," and "It's in Their Blood," a biographical sketch of 53 football coaches and players from the state of Oregon. Gill also has published a history book of the Les Schwab Bowl, which began as the Oregon Shrine Game in 1948.


Last year, Gill was honored with the MAC's "Cebula Award," after writing a booklet on the history of handball players at the athletic facility.


"I've done that for my high school group at our reunions," said Gill, who turns 83 in November. "And for my dental school class of '61."


Gill does these things because, well, if he doesn't do them, they don't get done.


"Bob is that guy who is a facilitator, an organizer, but never gets any recognition," former NFL and Portland State quarterback Neil Lomax said. "He's a behind-the-scenes guy, and it's neat his contributions are finally being acknowledged."


Gill is past president and served as a board member with the National Football Foundation's scholar-athlete program for 40 years. He successfully nominated Lomax and coaches Tommy Prothro and Ad Rutschman to the NFF College Hall of Fame.


"Bob was the point man to make sure the (NFF College Hall of Fame) committee knew about me," Lomax said. "He was a huge reason why I got selected, and he took the lead in making sure my experience with the College Football Hall of Fame was as first-class as it was."


Each year at the local NFF banquet, Portland-area scholar-athlete football players were honored. Coaches at Oregon State and Portland State would present awards, and a national name would serve as keynote speaker.


"What we failed to do was impress upon the kids to give back to the program later on," Gill said. The NFF banquet has been dark for two years now due to lack of volunteers to run the program in the years after Gill bowed out.


In 1998, after 50 years of existence, the Shrine Game was on its last legs after moves from Portland to Eugene and Corvallis.


"It was dying," Lomax said. "The game wasn't even going to take place."


As an 11-year-old, Gill had attended the first Shrine Game. He had played in it, as a quarterback out of Jefferson High, in 1954. Gill later served as president of the Shrine Game board and helped it through its transition to the Les Schwab Bowl.


"Bob was the guy who pulled everything together," said Larry Knudsen, who was on the state's coaches association board at the time.


"He was a key component, especially in connecting the right people to get the game moved back to Portland," said McCallum, who in 1998 was working as an intern at "ProMax," Lomax's sports management firm. "He used his connections with the coaches and the Shriners to make the move happen."


ProMax helped procure enough sponsorship to keep the game alive; Prime Time Sports, under the direction of McCallum, took it over in 2007 and still operates the annual affair at Hillsboro Stadium.


"It would not have happened without Bob," Lomax said.

In 1975, Gill worked with metal worker Gary Hamblet to produce the "Chuck Withers Memorial Award." For the past 44 years, the award has been presented at the postseason players banquet to a deserving supporter of Portland State football.


Oh, yes — Gill also served eight years on the board of directors (1986-95) for the Oregon Sports Hall of Fame, with six years as chairman of the selection committee.


Gill is a pretty fair athlete himself. He was inducted into the PIL Hall of Fame in 2005 for his performance as Jeff's QB, just a few years ahead of future Heisman Trophy winner Terry Baker.

Later, in his 50's, Gill became a handball player, and has joined with Grossenbacher to win three regional Masters doubles titles. Grossenbacher, a star basketball player during his college years at Willamette, is the most decorated handball player in U.S. history with 58 national age-group titles.


"Bob and I come from similar backgrounds," said Grossenbacher, 81. "He didn't have a father, either. We played ball in the streets as kids. We're like bookends. He's a doctor of dentistry; I'm a doctor of orthopedic surgery. We self-educated ourselves to the highest degree.


"I consider Bob a scholar-athlete. Athletics doesn't build character; it reveals character. Hs is the sweetest, most compassionate guy, a great provider for his family. He's my hero."


That's why it was difficult for Grossenbacher in March 2018 when Gill was diagnosed with a stage-four malignant brain tumor.


"We had a talk," Grossenbacher said. "I told him, 'Bob, you were born an athlete; you're going to die an athlete.' And he still is an athlete. He works out and keeps up his health. Jim Valvano said to live life to the fullest ever day. Bob went Valvano on me."


After surgery to remove the tumor and ensuing chemotherapy and radiation treatments, doctors found a second tumor. They put Gill on Vastin, a drug to slow its growth. He was told his life expectancy was seven to 11 months.


Eighteen months later, "I'm doing fine," he said. "I can't believe it. I do not have any symptoms, not even a headache."


In August 2018, though, Gill was dealt another blow. His wife of 61 years, Faith, succumbed to kidney failure. Bob served as caregiver for her final eight years of life. "She was my lifelong cheerleader," he said.


Gill has gotten through the heartache, in part due to his many friendships and his sport. He plays handball three days a week at the MAC club.


"You know the book, 'Tuesdays with Morrie'?" Grossenbacher asked. "Bob has 'Mondays with Eddie.' He has spaghetti with Eddie. We play handball, then we eat and talk about life."


It was cool to see Gill milling around the room at the social hour before Tuesday's banquet, visiting with friends (and former Jefferson Democrats) such as Baker, Renfro, Mick Hergert, Art Eckman and Dave Gunderson. For once, Gill was getting photos taken of him. Normally, he's the one snapping pictures of everyone else.


Induction into the Oregon Sports Hall of Fame means a lot to Gill, who learned much when he hosted Joe Loprinzi in 1991. The legendary fitness/weightlifting coach was inducted, like Gill, for special contribution to sports.


"Joe was the most appreciative person in the room that night," Gill said. "I took a picture of him when (Oregon Journal sports editor) George Pasero presented him with his award. I took it to his house the next day. He framed it and put it in his office, where it stayed until he died. That made an impact on me, when I saw how he reacted and what it meant to him."


On Tuesday night, it was Gill on the receiving end of a well-deserved award. So nice to see it go to a person who has lived a life full of giving.


Read more about Dr. Bob Gill (link below) and his Linfield connection:

Posted by Wildcatville at 1:15 PM 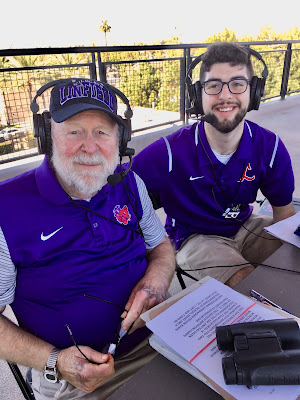 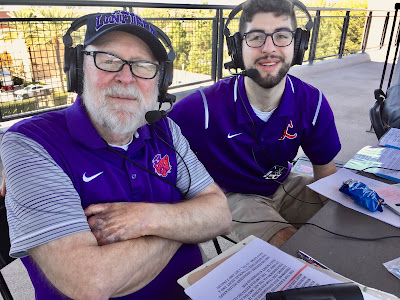 Graeme Fineman is the new Linfield football play-by-play “voice,” according to information posted on the Linfield Athletics website 8/19/2019.

A Linfield 2019 grad, Fineman succeeds Kevin Nelson, Linfield Class of 2016, who held the job for three games in the 2015 and all games during the 2016, 2017 and 2018 football seasons. Nelson left Linfield for a social media job in Portland.

Born and raised in Arlington, Virginia, Fineman graduated from Linfield with a bachelor's degree in history.

“In addition to his broadcasting responsibilities, Fineman will take on an increasing role with procurement and stewardship of corporate sponsorships as well as athletics marketing and game-day promotional activities. He'll provide general support in the sports information office as well.”

Fineman told Linfield Athletics, “I'm beyond thrilled to continue being a part of the Linfield College family," he said. "I'm excited to help grow the Culture of Excellence that Linfield has established. It is truly is an honor to be the voice of the Linfield Wildcats."

Posted by Wildcatville at 8:11 PM