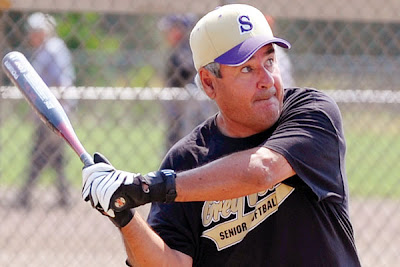 Story below from 2010 is about Leonard "Len" Gann, a 1971, Linfield graduate. He transferred from Linfield after attending Palomar College, a two-year college in San Marcos, Calif. He was a quarterback for the Palomar Comets. He was a Linfield QB, playing on the first two seasons (1968, 1969) of Ad Rutschman-coached Wildcat football teams. Gann was Linfield's starting quarterback in the Wildcats' 1968 season-opening 17-7 victory in Boise over the Boise State Broncos. He threw a touchdown pass to Bob Murphy in the game. View video of Len Gann responding to his Nov. 10 induction (Class of 2010) into the San Diego Hall of Champions. Gann lives in Sequim ("Squim"), Wash. According to Wikipedia, Sequim (in Clallam Co.) had a population more than 6,600 in 2010. "The city has been increasing in population dramatically in recent years due to the influx of retirees from the Puget Sound region and California," says Wikipedia. The city lies within the "rainshadow of the Olympic Mountains and receives on average less than 15 inches (380 mm) of rain per year—about the same at Los Angeles.... Yet the city is fairly close to some of the wettest temperate rainforests of the contiguous" U.S. Photo by Michael Dashiell of the Sequim Gazette.
Gann among greatest

Which of these names doesn’t belong?

If you had said Leonard Gann two months ago, you’d have been correct.

The former high school coach, who led teams in six different sports and racked up 322 wins, seven league titles and two sectional titles in prep softball, was inducted into the San Diego County High School Coaching Legends at the San Diego Hall of Champions, joining some of the nation’s greatest coaches and athletes.

Dignitaries and former players honored the retired coach at a ceremony at the hall on Nov. 10.
“Totally surprised,” Gann says of his selection. “I thought it was quite an honor.”

A committee that honors coaches for the hall contacted Gann, a Sequim resident for the past five years, about two years ago. He filled out an application detailing his 35 years of coaching football, baseball, basketball, softball, soccer and tennis teams for the San Marco, Calif., Unified School District.

“I never gave it any more thought,” Gann says.

He worked as a teacher for the district, in special education, health and safety, and, for the last decade or so, as head of the physical education department.

Well before that, however, Gann had his eyes on Sequim. His wife Jane’s twin sister Anne Terrell lived in Sequim and the Ganns planned their move about four years before he called it quits at San Marco.

For love of the game

It’s a retirement in name only. Gann, 63, is also player-manager for the Sequim Senior Softball team.

“This guy is an athlete,” says teammate John Zervos. “I think I’m pretty good. I’m one of the fastest on the team (but) I can’t keep up with Leonard. He’s the leader of the team.”

And while playing the game keeps Gann’s competitive juices flowing, he says there’s something special about being a coach.

“You always love to compete (but) … to watch (a game) is probably more satisfying,” Gann says.

If he had to pick, Gann says his favorite sports to coach are softball and football.

“It takes a total team effort to win,” he says. “In basketball, it takes five guys, maybe a couple off the bench. But (in football), if all 11 guys aren’t working together, you don’t win.”

A good winning percentage, however, doesn’t mean someone is a good coach, Gann says.

“It’s not so much wins and losses; it’s how the kids respond to the coach,” Gann says. “Some of my best teams were not the most talented.”

About 70 or 80 former players joined Gann and 11 other San Diego-area high school prep coaching stars at the ceremony in November.

Zervos joked that Gann needed to go out and buy long pants for the ceremony, since team members say they’d never seen their teammate in anything but shorts — even in chilly Sequim winter weather.

The San Diego coaching icon says Sequim is home now, even if his name and career highlights reside in Southern California.

“I truly miss the even weather they have, but I don’t miss much more than that,” Gann says. “Sequim’s a great place. I wish I could have grown up here. It’s the small community I guess. The kids here are great — and the coaches.”
Posted by Wildcatville at 4:19 PM

Angels in the Helser Field outfield?

Angels in the outfield of Linfield's Helser (baseball) Field? No, but outfield work was being done there as these Wildcatville photos (all identfied with a "W", taken 6/14/2012) atest. Arial photos -- taken several years ago -- from Linfield Sports Info. 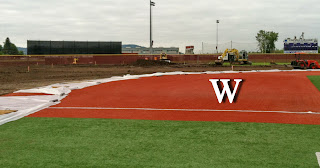 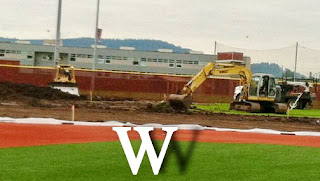 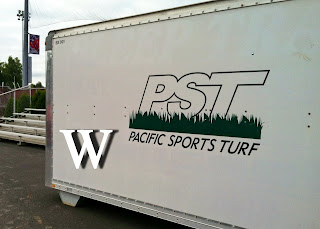 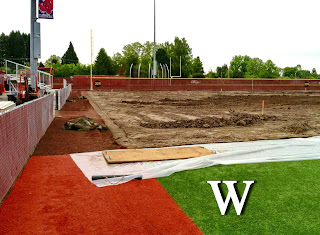 Posted by Wildcatville at 2:05 PM