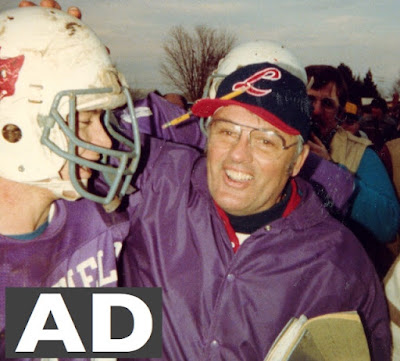 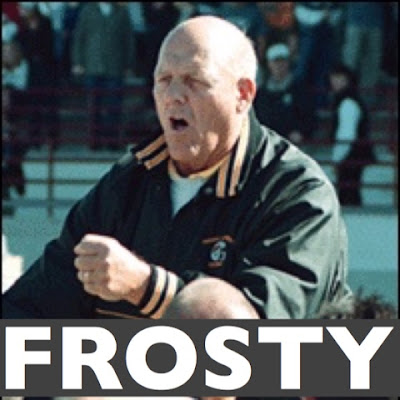 Linfield football fans still talk about the many memorable football games played between Linfield and Pacific Lutheran when Ad Rutschman and Frosty Westering were the rival coaches.

The 24 games included 4 playoff games, Linfield winning 1 and PLU the other 3.

In the 24 games Ad and Frosty played each other, Linfield scored 470 points and PLU 490.  That was an average differential of less than 1 point per game.  For 6 games the differential score was 1 point.  For half the 24 games, the margin of the winning team was 10 or less.  Close games were the norm.
...

Posted by Wildcatville at 3:31 PM

Game was played on Dacotah (spelling is correct) Field on the campus of North Dakota State University in Fargo, N. D.

(Moorhead, Minn., and Fargo, N.D., are two miles apart. For all intent and purposes, they are one city.)

Future Linfield football coach Ed Langsdorf was a Concordia player, but not suit up for the game. He was a reserve player (sophomore) and watched it from the Concordia sideline in street clothes.

….front row, third from left, #82. His roster info (below) shows him wearing a different number:

His San Diego Chargers bio, when he scouted for the NFL team, says, “Langsdorf was born in Vallejo, California. He attended Glasgow (Mont.) High School and played football and basketball, and ran track. He became a defensive end and tight end at Concordia College in Moorhead, Minnesota, and graduated with a degree in history in 1967. He earned a master’s in physical education from Washington State in '69 and a doctorate of education in physical education from Arizona State in '79.”

Game is colloquially known by Linfield fans as the “Concordia Ice Bowl” as it was played in temperatures between 10-15 (one story says game temp was 18) degrees before about 5,200 fans. 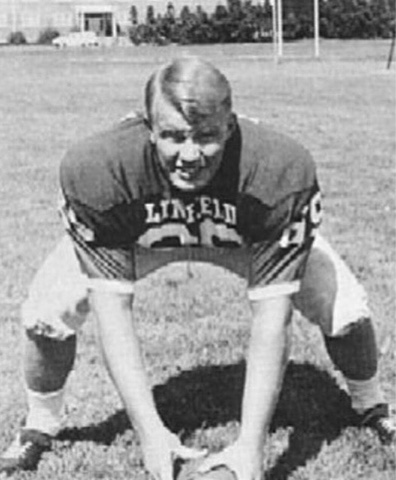 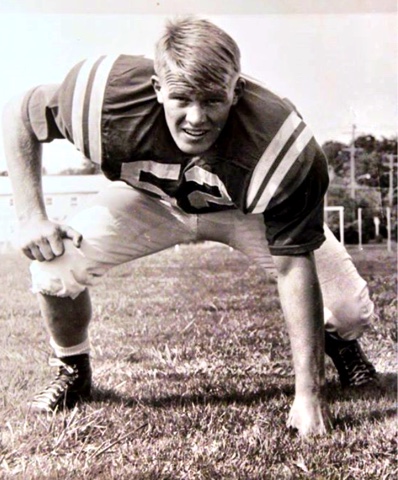 "That field was hard as concrete. Concordia wore tennis shoes and had decent traction. We had cleats and slid around like we were wearing ice skates. Never been so cold either,"said Brian Petersen (see photos), a freshman player for Linfield in the "Concordia Ice Bowl" for Linfield.

In that 1964 season, Petersen played on all Wildcat special teams. He rarely got on the field as a center and a middle guard on defense. Norm Musser and Bob Ferguson, both All-Americans and future Linfield Hall of Famers, were the respective starters. Bill Mickle was the Wildcat starting QB. Backup QB was Terry Durham, for whom Petersen snapped.

"I've always felt blessed to be a part of the Linfield tradition and for playing with a lot of very talented players. I know a lot of Linfield guys in that era could've played anywhere," said Petersen.

A member of Linfield Class of 1968, Petersen served in Vietnam as a U.S. military Hospital Corpsman, three years for the Navy and his last year for the Marines.

He worked 30 years in the transportation industry, primarily with Viking Freight and FedEx Freight. 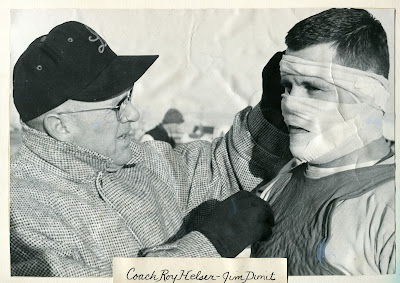 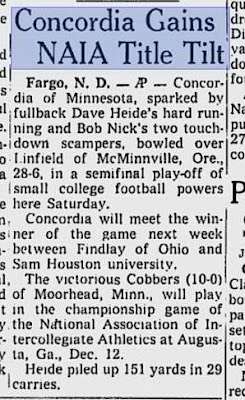 At least two future NWC coaches were on the Concordia 1964 football roster: Ed Langsdorf, eventually to become an assistant and head football coach at Linfield, and Paul Hoseth, who went on to become a PLU coach and athletic director.

...Below is part of the complete from Concordina’s perspective story:

Meanwhile, in other quarterfinal games, Concordia's next opponent was being chosen. Not surprisingly, it was the NAIA's number-one-rated team from Linfield College, McMinnville, Ore.

While a few Cobber fans managed to get to Oregon, most contented themselves with the play-by-play on radio station WDAY, Fargo. It was a thriller all the way.

On the first play from scrimmage, the Cobber backfield intercepted a Linfield pass. It was a good omen. The natural turf, muddy from snow and rain earlier in the week, was very slippery and led to a controversial call by the referee. With the game tied at 17 in the last quarter, a Linfield ball carrier slipped and apparently fumbled the ball to Concordia on the Linfield 8-yard line. But the referee overruled the official and Linfield retained possession.

But the Cobbers won this game the way they had played all season: by forcing the other team to make big mistakes and not making any themselves.

With about three minutes left and leading 23-17, Linfield was unable to move the ball on the ground and sent in their punter. The snap from center was low and their kicker chose to run toward the sideline rather than an attempted kick on the slick field against a horde of charging Cobbers. And Concordia had a first down on the Linfield 17.

Concordia, perhaps remembering how St. Olaf had done the unexpected to them, did the unexpected to Linfield. A perfectly thrown pass and a good point-after kick gave Concordia a 24-23 win that even impressed (Jim), Christopherson, Concordia head football coach.

"I guess I'm still in a fog," he said after the game. "So much happened so fast near the end. It was just unbelievable." He later admitted, "I really don't enjoy games like these. I guess I'd rather be a fan when you have this sort of contest."

Too small for you to read? If so, click on it for an easier to read version: 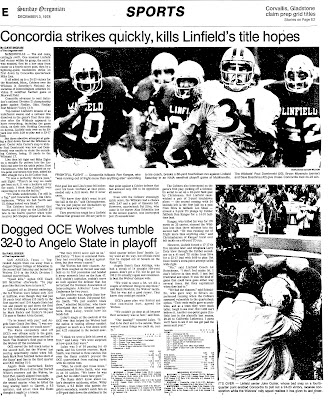 
Ray Fields manager of radio station KMCM in McMinnville has announced that KMCM will broadcast the Linfield-Concordia (football) game live an direct from Dacotah Field in Fargo, North Dakota.
The broadcast will begin at 11:15 a.m. PST with game time set for 11:30 a.m. Announcing the game will be Craig Singletary, a member of the staff at Linfield College and a veteran athletic event announcer for KMCM. Singletary will be assisted at the game by two Linfield College students from the Radio-Speech Department.
Seven Yamhill County business firms will be sponsoring the broadcast with station officials reported will be brought to this area of an unusually high cost to the distance involved. Sponsoring the pre-game activities will be City Water and Light. The four quarters of the game will be sponsored by Oregon Mutual Insurance Company, the U.S. National Bank of McMinnville, Darigold and the Yamhill County Association of Independent Insurance Agent. Halftime activities will be brought to this area by Shakey’s Pizza Parlor and Midway Motors.
Actual game time in Fargo will be 1:30 p.m., however the two-hour time difference has moved the time up to 11:30 a.m. for Yamhill County residents.
KMCM officials reported that the game will not be carried in the Fargo area on either radio or television. For this reason, KMCM was forced to send its own staff to Fargo in order to bring the game to Yamhill County listeners.
Posted by Wildcatville at 11:45 AM

God called Craig Everett Singletary home on May 14, 2016, where he is now in the presence of his Savior.

Craig was born April 14, 1931, and raised in Portland, Oregon, to William and Rita Singletary and older brother, Bill.

He graduated from Grant High School, where he played the cello in the school symphony and the Portland Junior Symphony.

He attended Lewis & Clark College, majoring in speech communications. He received his master and doctorate degree from the University of Oregon.

In 1958, he started his career with Linfield College, where he taught speech and communications for over 33 years.

While at Linfield, he created and chaired the Department of Communications and also established the first FM radio station on campus.

Craig was recognized as the "Voice of Linfield" for his 40 years of public announcing at the Linfield football games.

He was inducted into the Linfield Sports Hall of Fame in 2001, and the annual high school speech tournament hosted by Linfield is named in his honor.

Craig (known by "Doc" or "Jack") was respected and loved by many of his students.

While on choir tour at Lewis & Clark College, Craig met Nancy Brown, and they were married for more than 50 years.

They have four daughters, Carol, Diane, Linda and Marcia.

Upon retirement, Craig followed his passion for traveling and did video presentations of the places he visited all over the world. Winters were spent at Sky Valley, California.

Following the passing of Nancy, Craig was blessed to find love again with Fae, and they spent 8 1/2 wonderful years together.

Craig’s favorite words of wisdom were "keep your options open."

Craig was preceded in death by his parents; his first wife, Nancy; and brother, Bill.

Memorial services will be held at 2:00 p.m. Friday, May 20, at McMinnville Covenant Church. Private interment will be at Willamette National Cemetery.

Craig Singletary did so much in his radio career, it’s hard to cover everything he accomplished. Below, was found during research, followed by the McMinnville Newspaper Obit.
In 1946 Craig was part of the Portland Junior Symphony, playing the cello and later did some broadcasting on KBPS. In June 1949 Singletary graduated from Grant High School with a scholarship to Lewis & Clark College. In 1951-52 Craig was serving in the U.S. Air Force in Fairbanks, Alaska and broadcasting on AFRS.
In June 1954 after graduating from Lewis & Clark College he joined the air staff at KMCM McMinnville as Sports Director, broadcasting McMinnville High School Grizzlies football & basketball games, plus he was newscaster on daily at 12 noon & 6pm, and a sales accountant.
Craig held many titles over the years at KMCM. In 1955 he became KMCM News Director as well as continuing as Sports Director. In 1956 Craig added a third title, KMCM Program Director.
In September 1956 Craig Singletary began broadcasting Linfield College Wildcats football games for the next 10 years. In 1958 Craig E. Singletary was offered a part-time faculty position at Linfield College to teach mass communication and speech.
In October 1959 Singletary was given the over all title of KMCM Director of Operations. In 1959 Craig was doing morning drive on KMCM 6-9am with his show “The Singletary Affair.” In September 1960 Craig joined the Linfield faculty full-time and “The Singletary Affair” was reduced an hour, 6-8am.
Also in Fall 1960 Craig founded the Linfield carrier current station KLIN Radio. “I felt that it was one way to give the students practical experience,” Singletary said. In Spring 1961 Craig E. Singletary became KMCM Asst. General Manager.
On September 1, 1963 it was announced Craig Singletary, Asst. Professor of Speech at Linfield College, received his Master of Arts Degree in Speech from the University of Oregon. Also in Fall 1963 Craig was back as KMCM Sports Director again to Spring 1966.
On January 17, 1972 KSLC at Linfield College began operation and Craig E. Singletary was the founding General Manager. In 1993 he retired at Linfield.
.....
For your info from Wildcatville: KMCM-AM (1260) radio was put in the air June 18, 1949, by McMinnville's newspaper, the Telephone-Register/T-R later to become the News-Register/N-R. In 1959 the newspaper sold the station.