Posted by Wildcatville at 10:22 PM

She was hardly a 'Hollywood Girl.' 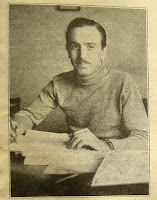 It may be a bit late, but Wildcatville DEMANDS correction of anarticle in the May 15, 1933, issue of Time magazine. The article in question is about Mickey Mouse's creator, Walter ("Walt") Disney.
Headlined “Profound Mouse,” a sentence in it says, “His wife. LillianMarie Bounds, a Hollywood girl who has never had anything to do withthe cinema, calls herself a "mouse widow."
Not so, says Wildcatville. Lillian was far from being accuratelyportrayed as a “Hollywood girl.”
According to Magictrip.com, she was “Born in Spalding, Idaho in 1899 as the tenth and last childof Jeanette Short Bounds and Willard Pehall Bounds, Lillian grew up inLapwai, Idaho, on the Nez Perce Indian Reservation. She moved to Los Angeles in 1923 to join her older sister Hazel. A friend of her sister was working at the studio of Walt Disney, and told Lillian about a job opening there. Approximately two years later, Lillian and Walt married on July 13, 1925, in Lewiston, Idaho.”
Posted by Wildcatville at 7:57 PM