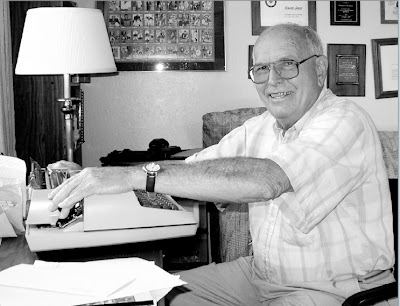 Note: Howard Graves attended, but did not graduate from Linfield College, McMinnville, Ore. He's a member of the college's Class of 1951.

— There’s no computer, no e-mail, no fax machine at . Yet Howard Graves is connected to AP bureaus around the world.

Since retiring in 1993 as chief of bureau, has become a celebrity to many AP staffers using the seemingly forgotten medium of the mail.

He sends tearsheets from his home.

He sends tearsheets while on vacation.

He even sends tearsheets from newspapers his neighbors bring back from vacation.

To bureaus as near as and as far away as , envelopes bearing ’ typewritten return address carry tearsheets from The Arizona Republic, The Daily Courier of Prescott and ’s Gallup Independent, among other newspapers.

Lindel G. Hutson, chief of bureau in Oklahoma City, said, “I was handing out some Howard clips last week and one of the veterans quipped to a new staffer that you know you’ve arrived in the AP when you get a byline from Arizona.”

That validation comes from the mile-high community of (it’s pronounced press’-kit, not press’-kot, he’ll remind you), about 90 miles north of . It’s here, amid the pines on a summer afternoon, that we catch up with the man who calls himself “The Unaclipper.”

Returning from our lunch, crosses the street to the mailbox and then picks up the Courier — an afternoon newspaper — from the driveway before heading inside.

“I’ll be darned,” he says, holding up a letter. It’s from Foster Klug, a staffer in the bureau. Klug thanks for a tearsheet on a travel piece he wrote from . smiles. This will go into a stack of thank you cards and letters, several inches thick, in his office.

He then opens the Courier on the kitchen counter. An AP story from is a brief on page one. That’ll go to Chief of Bureau Bill Beecham in . A wildfire story with byline and photo will go to the , bureau.

The bureau will receive a tearsheet with a lengthy story on an inside page — Chief of Bureau Brian Murphy sends delightful thank you letters, says.

With that aside, Graves sits down to face an obvious question from a grateful news agency.

But seriously, it’s because remembers the uncertainty of sending wire stories into the void and the thrill staffers get from seeing their work in print.

“You just never know where these stories are going to get used and why they’re going to use them,” he says.

What started out as sending tearsheets to writers he knew has become over the past several years a hobby taking up five or six hours a week and requiring not-insignificant expenditure s to the U.S. Postal Service.

sends tearsheets to 25-30 domestic bureaus and around 20 international bureaus.
What keeps him expanding this enterprise of tearing, stamping and mailing? The answer seems to lie in that stack of thank you notes.

There are letters, cards and postcards from and , and , and . sent a baseball cap. sent envelopes and mailing labels. Many bureaus send stamps.

He pulls out a handwritten note from Angela K. Brown, correspondent in . “Thank you so much for sending me copies of newspapers that run my stories,” she says. “I rarely get to see where my stories go.”

“This is what a lot of the letters say,” says.  “They’re so pleased someone is thinking of them.”

It’s a fitting hobby for , who turns 77 in November. He began his journalism career at a weekly newspaper in his hometown of , and spent more than 40 years with AP. His AP posts included chief of bureau in , and , as well as more than a decade in , where he supervised coverage of and the central Pacific. He is a past national president of the Society of Professional Journalists.

His office is a portal of sorts back to Honolulu, where a Smith Corona typewriter similar to the one on Graves’ desk once conveyed praise and blame to this reporter.

He has no computer and insists he never will. As long as he can buy ribbons, the staccato of his typing will ring through the house he shares with Audrey, his wife of 48 years.

On the desk, behind the typewriter and next to a scale and a photocopy showing current postal rates by the ounce, there are a half dozen or so open envelopes containing tearsheets. It’s the beginning of the clipping cycle, it turns out. mailed 20 envelopes the day before.

opens a desk drawer containing stamps and envelopes sent by bureaus. He keeps them sorted by bureau and uses each bureau’s stamps to send its tearsheets. If a bureau sends addressed envelopes, he’ll take them on his vacations and mail tearsheets from the road.

He returns to the thank you notes. Nordic & Baltic News Editor Matt Moore recently sent a one-and-a-half page letter catching up on AP operations in that region.

A note from Denver Chief of Bureau George Garties, who also sent stamps, says, “Please keep them coming. We love it.”

It’s clear that he savors each one. “That’s what it’s all about.”

—     --Steve Elliott was bureau chief in when he wrote this story.

Posted by Wildcatville at 2:44 PM