‘Knowns’ and some ‘not well knowns’ about Roy Helser 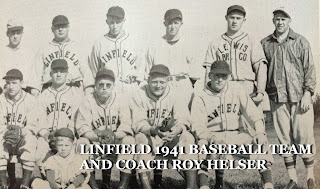 …A member of Linfield Class of 1936, Roy Helser was a three-sport (football, basketball and baseball) athlete for Linfield.

…He coached Linfield in football (as an assistant), basketball and baseball. His 1966 Wildcats baseball team won the college’s first ever national championship in any sport. He’s in the Linfield Athletics Hall of Fame as a coach and athletic director (1968-1973).

…Helser and Paul Durham (also Class of 1936) were co-head coaches of Linfield men’s basketball for three seasons, 1949-1952. Helser was head coach by himself for nine seasons, 1952-1961. He retired from coaching basketball after the 1960-1961 season and was succeeded by Ted Wilson.

Some Roy Helser not well knowns …

…Although a member of the Class of 1936 – along with this wife Dorothy Helser – Roy Helser graduated in 1941.

...Although retired from coaching Linfield men’s basketball after the 1960-1961 season, he coached the 1965-1966 basketball team for seven games. 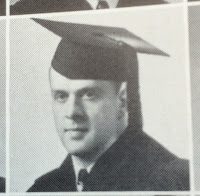 With the permission of Elam Anderson, Linfield president, after Dorothy Evelyn Wall and Roy Herman Helser married Aug. 11, 1935, in Kitsap County, Wash., they became the first married couple to attend the college.

After Dorothy Helser graduated in May 1936, Roy played professional baseball and Dorothy often traveled to his games.

"He had great stuff, but he was wilder than a March hare," she told the McMinnville News-Register, recalling how her husband, a left-handed pitcher, often threw equal numbers of strikeouts and walks.

In 1941, the Helsers (Dorothy, Roy and baby son Dennis, a.k.a. "Denny") returned to McMinnville so Roy could earn his degree.

The 1941 Linfield Oak Leaves yearbook shows Helser earning a bachelor of science degree in Physical Education as does a 1941 edition of the McMinnville T-R/Telephone-Register newspaper, predecessor of the N-R.

Roy Helser’s time as a professional baseball player included playing for the Salem Senators of the Western International League in 1940 and 1941. This was when he was back on the Linfield campus as a student working toward his degree. 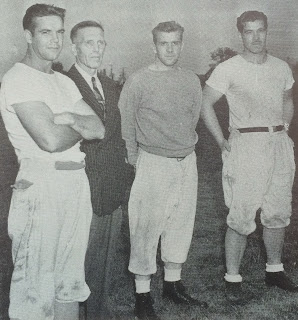 The 1941 Oak Leaves has photos of Helser as coach with the Linfield baseball team that year and also as coaching assistant to Henry Lever, football head coach.

Text in the 1941 Oak Leaves says in the 1940-1941 school year Lever was head coach at football, basketball and track and Helser “who starred in yore for Linfield ably took over the post of baseball coach…”In the same Oak Leaves it says, “Coach Roy Helser succeeded in turning out a completely capable club…” 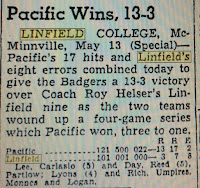 A story in the May 14, 1941 Oregonian, about a Linfield baseball game in McMinnville versus Pacific mentions “Coach Roy Helser’s Linfield nine…”

Whatever the case, Wildcatville says it’s more probable than not that Roy Helser was Linfield head baseball coach in the 1941 season. If so, that meant he was attending Linfield, coaching at Linfield and playing for the Salem Senators at the same time. 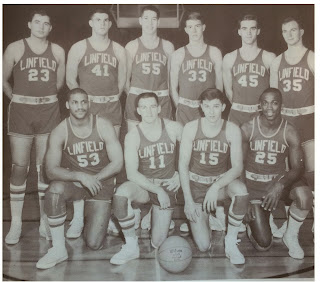 The afternoon of Saturday, Feb. 19, 1966, Wilson was admitted to McMinnville General Hospital with a heart attack. Because of that, Wilson’s physician would not allow him to coach the remainder of the season.

Roy Helser became acting coach with Linfield in the thick of a battle for the Northwest Conference title and a berth in the best of three NAIA District 2 playoffs with a team from the Oregon Collegiate Conference. Winner of the playoffs would advance to the 1966 NAIA National Tournament in Kansas City, Mo.

With Helser at the helm of the 1965-1966 Linfield team and JV coach Dick Barnett, a Linfield grad (Class of 1965) and former Wildcat basketball player, as his invaluable assistant, Linfield won six games in a row:

(All games in Riley Gym except L&C in L&C Gym in Portland.)

In case you wonder, NCAA and NAIA rules indicate that if a coach misses a game or a limited amount of games due to a temporary illness, the wins or losses by the team in his or her absence usually are credited to the head coach.  So, the wins and one loss in the final seven games of the 1965-1966 season are credited to Ted Wilson.

==Wayne Petersen (Class of 1966), 6-foot-2 senior guard, was a member of the 1965-1966 Linfield men’s basketball team. The day after Wilson was admitted, Petersen and other teammates went to McMinnville General Hospital in downtown McMinnville.  (Don't confuse McMinnville General with McMinnville Community Hospital, which used to be across Baker Street/99W from the Linfield campus.)

“A nurse saw us and asked why we were there. ‘We want to see our coach,’ they told the nurse. The nurses were not happy with Wilson. They caught him doing push-ups on the floor of his hospital room. “He did a hundred pushups every day and the fact he was in the hospital after a heart attack wasn’t going to stop him,” Petersen said.

==Roy Helser becoming coach meant Petersen was playing basketball for his father-in-law. Petersen and Susan Helser (Class of 1966), daughter of Roy and Dorothy, were married Dec. 26, 1965, in McMinnville. That was during Linfield winter break and during a break in games during the 1965-1966 basketball season.

==It wasn’t a complete surprise Helser became coach, Petersen said. “He had been the basketball coach and he knew us.” Dick Barnett, JV coach, wasn’t going to get the job because he was about the same age as the Linfield players and had played Linfield basketball with many of the 1965-1966 team members. “Dick had a good basketball mind,” Petersen said. Sitting next to Helser on the bench, Barnett got to do much of the game coaching.

==Petersen and teammates met on campus with Wilson, discharged from the hospital but still recovering from his heart attack. It was a “farewell and do well” to the team from Wilson before the Kansas City NAIA national tournament.

After that meeting, Wilson traveled to stay with relatives in The Dalles and recuperate.

The plane on which the Linfield team, coaches and others traveled to KC (on March 6) had another men’s basketball team on board. It was #2 ranked in the nation Texas Western (now University of Texas at El Paso); its coach, Don Haskins, and others.

Texas Western had been unbeaten until it lost 74-72 to Seattle University, Saturday night, March 5, 1966, in the Seattle Center Coliseum (now Key Arena) before a huge crowd.

Dan Beeson (Class of 1970,) Linfield 6-foot-8 freshman center sat on the plane one seat back and across from David “Big Daddy D” Lattin, Texas Western 6-foot-6 starting center. “He never said a word, but looked pissed off,” said Beeson.

Petersen sat next to Willie Cager, a 6-foot-5 Texas Western substitute forward. Cager told Petersen he, his teammates and coaches were mad at each other after the upset loss. Plus Cager said, their coaches were screaming at the players for being out on the town in Seattle after the game.

The Linfield entourage got off of the plane in Kansas City. The plane proceeded to Wichita, Kan., where Texas Western was headed to play (on March 7) and win its opening round NCAA tournament playoff game. It won three more games in the playoffs before meeting (on March 19 in Maryland) and upsetting #1 ranked Kentucky for the 1966 NCAA Division I national basketball title.

=Oregonian story about a Linfield baseball game in 1941 season.

Posted by Wildcatville at 9:21 PM